The UMASAR Foundation successfully concluded a fundraiser this winter to purchase a new rescue sled for use in the Tollgate area to respond to snow accidents. The fundraiser began over a year ago and was featured on the UMASAR website. It was promoted extensively by the Tollgate Trail Finders Snowmobile Club. Club members and other snowmobilers provided all the donations used to purchase the sled. 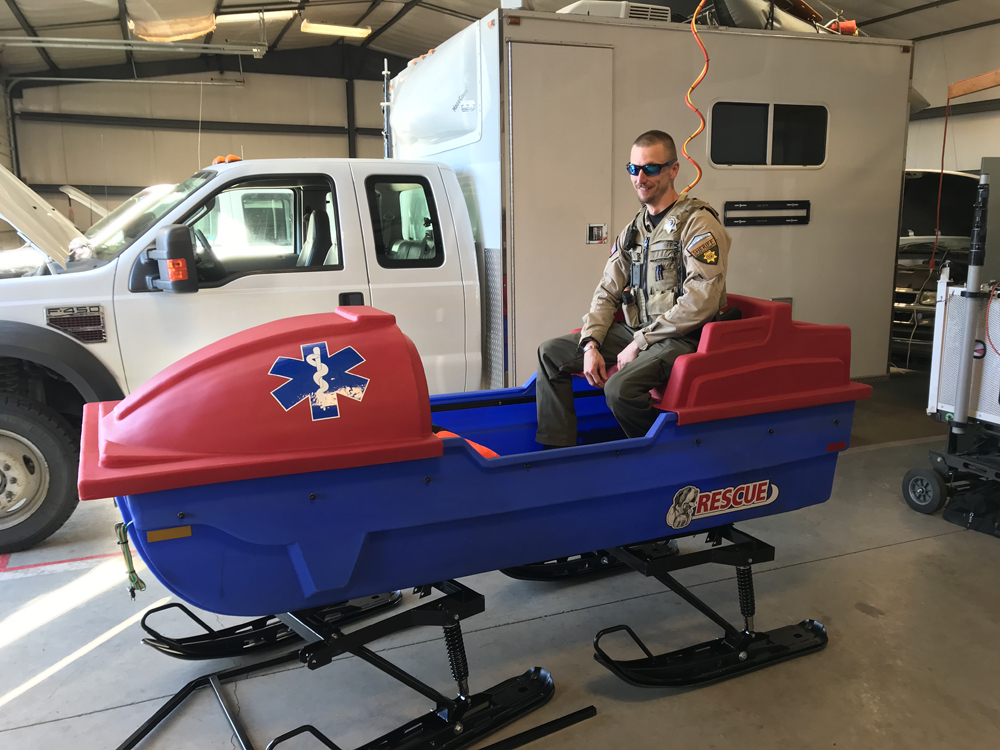 The rescue sled is manufactured in Canada. It has a protected area for the patient and has spring suspension which will result in less jarring. The sled can accommodate a backboard and plenty of blankets to keep an injured person warm in cold weather. It includes a place for a care giver to sit and monitor the patient during transport. The sled can be towed behind a snowmobile or UTV.

On March 5 a ceremony was held at the monthly meeting of the Tollgate Trail Finders. The sled's ownership was officially transferred from the UMASAR Foundation to the Umatilla County Sheriff's Office. Undersheriff Jim Littlefield accepted ownership on behalf of the sheriff. 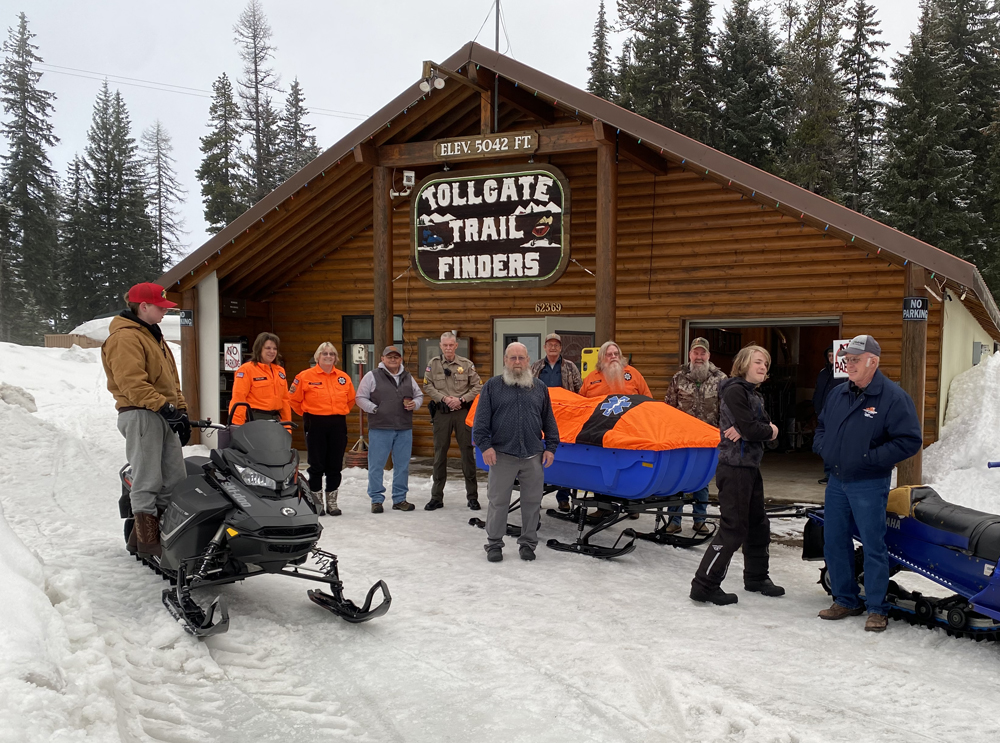 The sled will be stored at the clubhouse of the Tollgate Trail Finders and be available to any qualified first responder during an emergency.

UMASAR Foundation is extremely grateful to the members and friends of the Tollgate Trail Finders Snowmobile Club for providing this important resource. 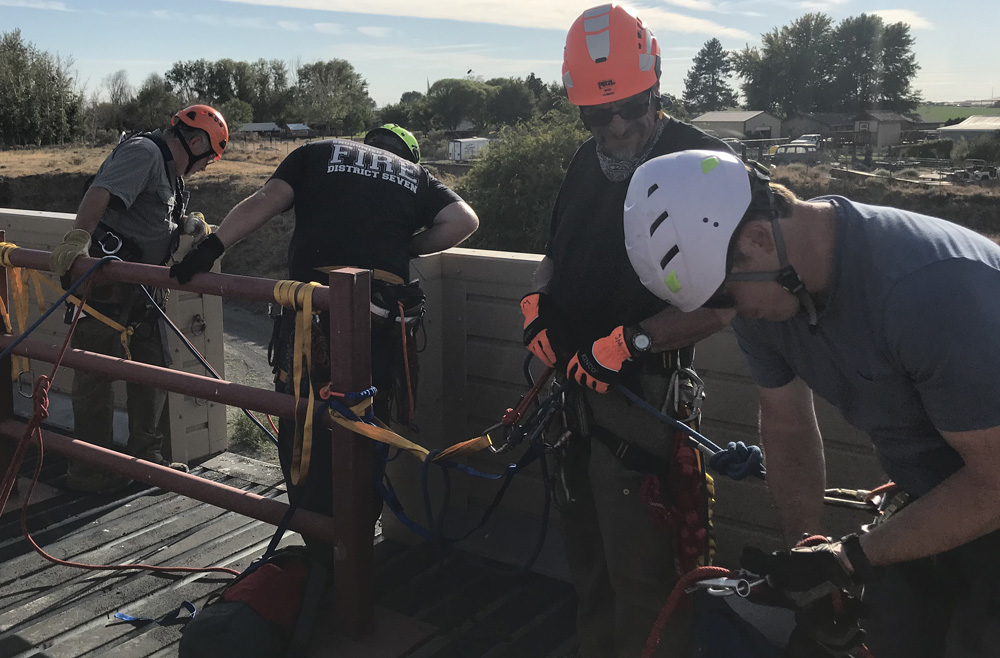 The basic rope rescue technician class was five days in length and included an academic portion where students learned about mechanical advantage systems, special rescue knots, equipment types, and constructing safe and effective rope systems to access victims who are injured or trapped on vertical or near vertical slopes. 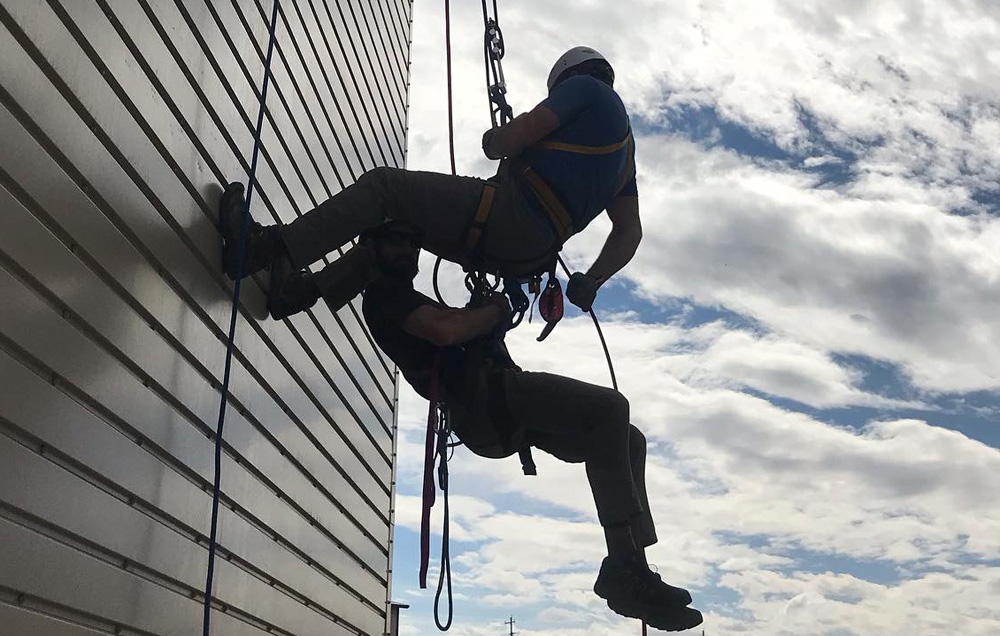 Most of the rope rescue class was taken up by practical exercises working with many of the rope systems commonly used to perform technical rescues. The training was sometimes intense with many long hours spent setting up the systems and learning their use. To graduate from the class students were required to demonstrate knowledge and proficiency in several technical skills, including the setting up of safe but effective mechanical advantage systems, performing rappels, and ascending back up a rope after descending. 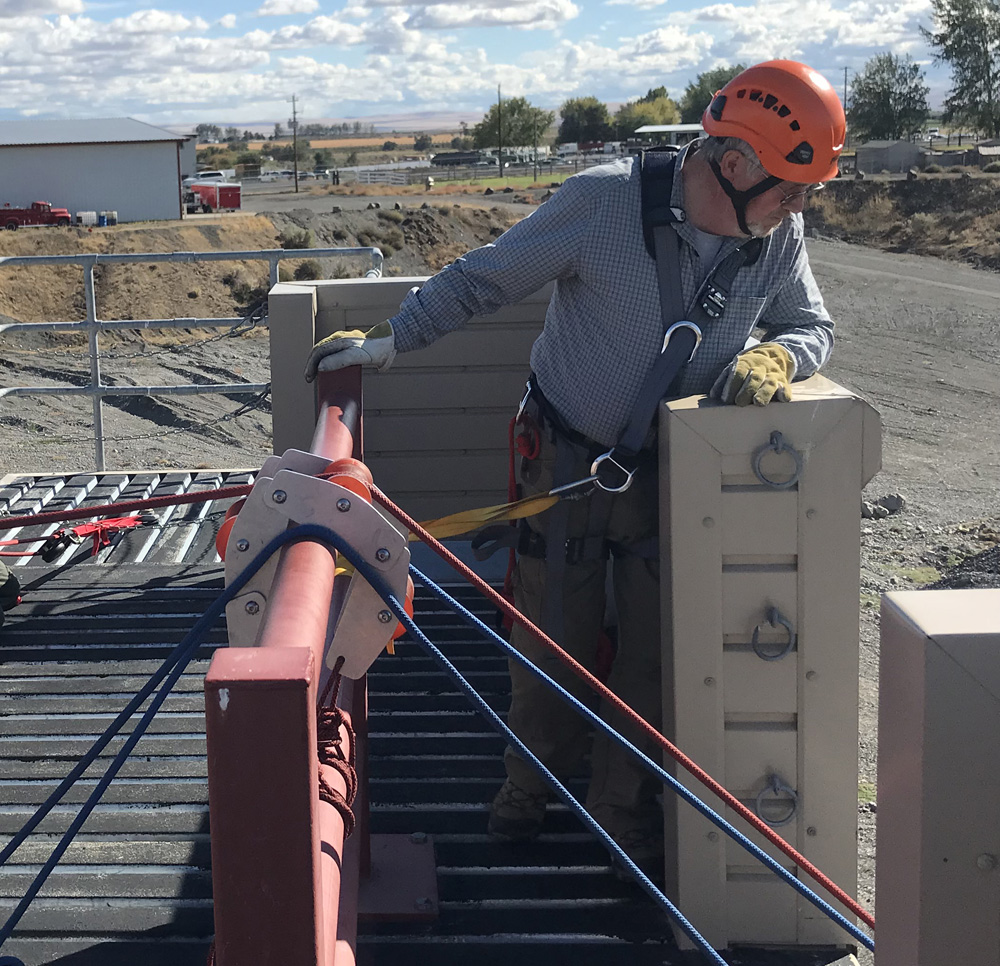 Searcher Radamacher serves as a safety officer on a lowering operation.

Students were also required to perform a "pick-off", where the rescuer descended to an injured climber and transferred the victim from the victim's rope system to the rescuer's. The rescuer then had to lower both themself and the victim to the ground.

The rope rescue class was also attended by members of the Union County Search and Rescue Team. Union County and Umatilla County SAR teams often work together on missions, and the two rope teams plan on standardizing their equipment and training so they can more effectively support each other during rescues requiring rope operations.

Members of UMASAR join the rest of the Umatilla County Sheriff's Office family in mourning the loss of Senior Deputy Jason Post, who tragically drowned in a rafting accident on 06/05/2021. 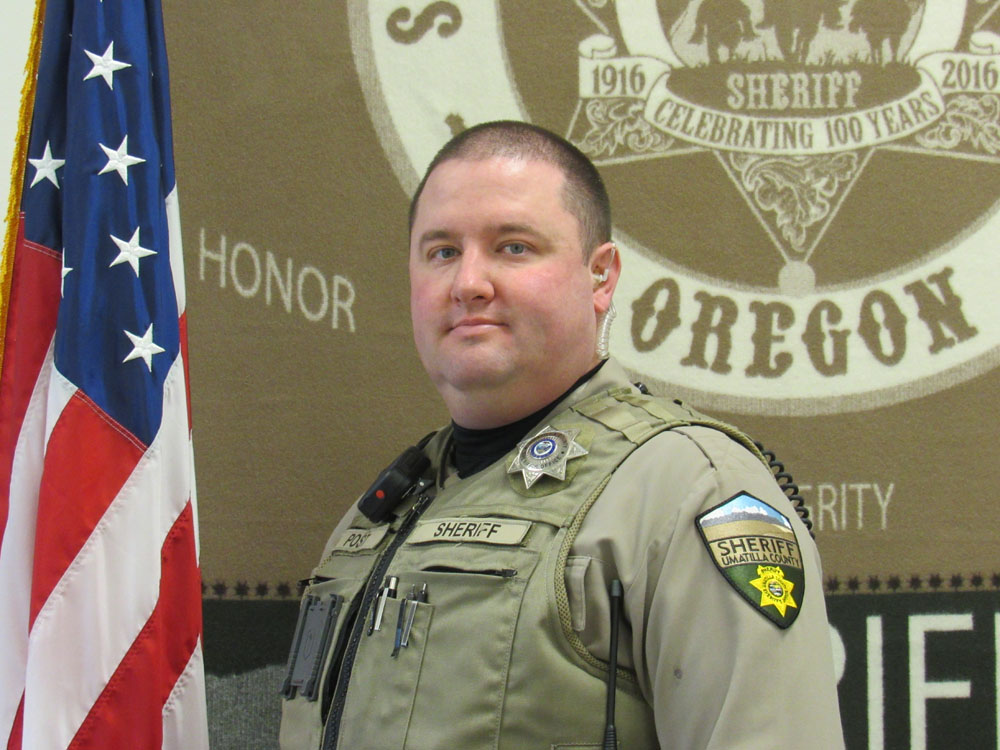 Deputy Jason Post began his career as a Reserve Officer for Umatilla County Sheriff’s Office in 2010 and was hired as a full time patrol deputy in 2013. He was well respected and loved throughout the entire law enforcement community. He was a Field Training Officer and a mentor to many of the officers on the road today. In mid-April of this year, Deputy Post was hired as a Probation Officer with Umatilla County Parole and Probation.

He was known for his devotion to his family, and he was very open about making the career change so he could focus on family and spend more time with them. He leaves behind a wife and baby girl.  We express our deepest condolences to his entire family. We are your family and our hearts are broken.

Deputy Post's untimely death may cause a financial burden for his family. A Go Fund Me Account has been set up for those who wish to donate to help. 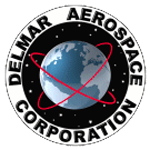 The Volatus Group is comprised of veterans with thousands of hours experience flying some of the most advanced drones used by the military. They have brought this experience to the Pendleton Drone range, where they have established a new school for aspiring drone pilots. The school provides training in a variety of skills used by drone pilots in the civilian sector.  The Volatus group was able to provide a scholarship to UMASAR searcher Carrell, who is already a licensed small Unmanned Aircraft pilot in the unit.  Searcher Carrell was excited to take advantage of this opportunity along with unit sergeant Dwight Johnson, who was allowed to audit the entire course. 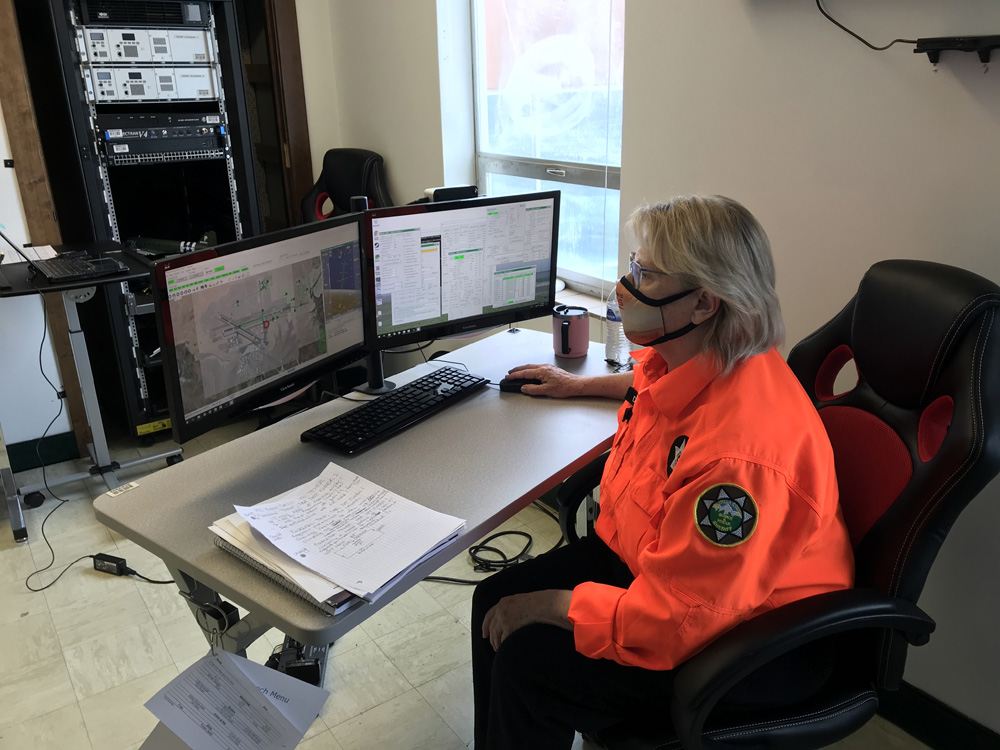 The course consisted of 96 hours of class lectures and simulator training for an unmanned aircraft equipped with state of the art automated avionics. Students were required to prepare flight plans, fly specific missions and land their aircraft all within the controlled airspace surrounding Pendleton. The students were also required to learn basic aeronautical concepts such as principles of flight, airspace designations, radio procedures, weather, and aviation safety. Much of this instruction was identical to that received by pilots of manned aircraft. 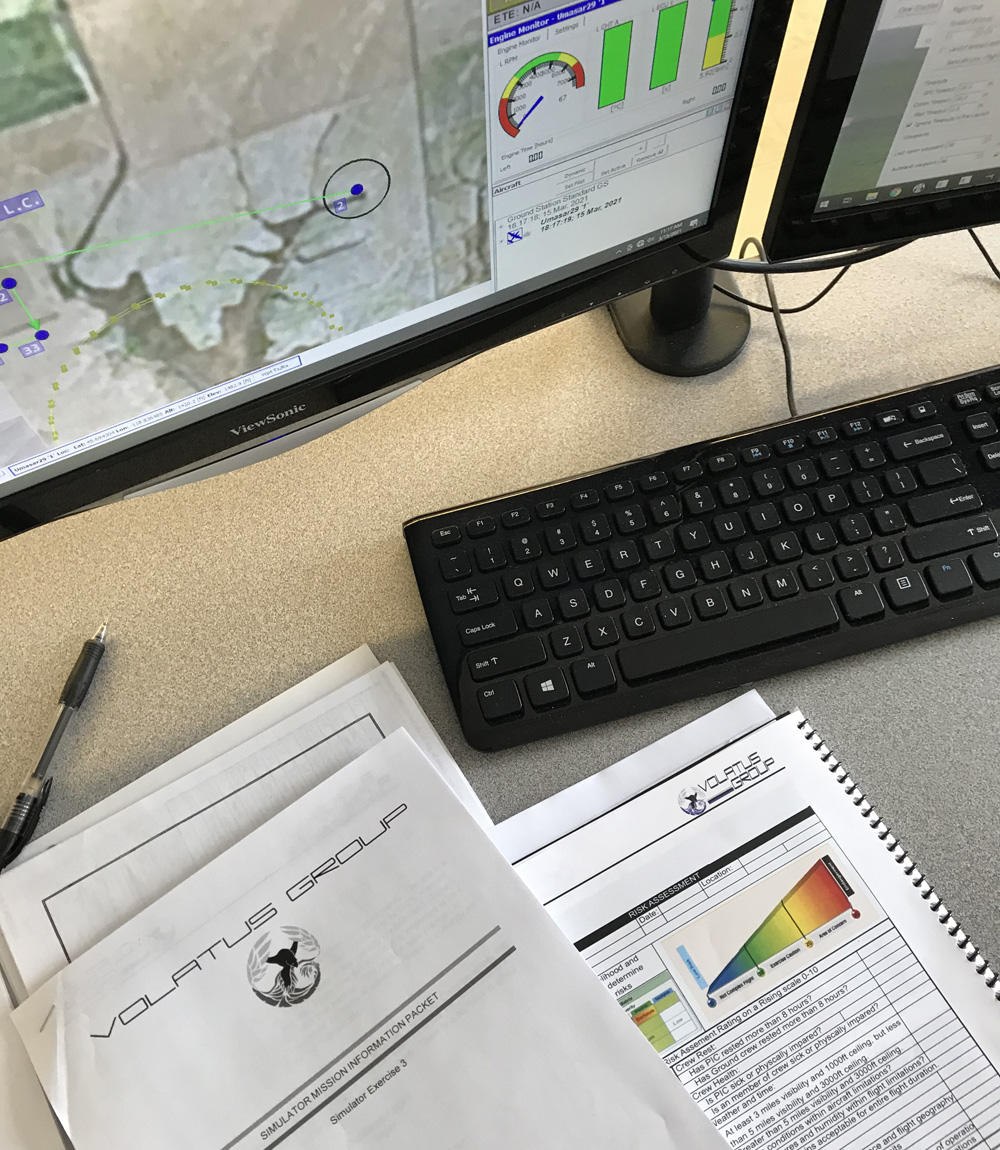 The course concluded with a comprehensive written examination and a check ride on the simulator. We are proud to report that searcher Carrell graduated with an "A" grade point average.

UMASAR hopes to partner with Delmar Aerospace and use the company for future basic pilot training as our unit seeks to expand the department's unmanned aircraft capabilities.

The unit was recognized for "exceptional responses" during 2020. The nomination letter emphasized the wide variety of challenges faced by the unit this year: "In addition to the normal calls for lost individuals, the team responded to multiple mutual aid requests, four fire evacuation calls to service, assisted whenever needed with our COVID-19 pandemic logistic needs, and two flood responses, one of which received a federal disaster declaration and was described by Governor Kate Brown as one of the largest evacuations instate history." (See Flood 6-9 FEB 2020 for a description of that mission.)

Not only did the unit win an award, but UMASAR Volunteer Searchers Bob English and Bill Morris were also selected as the Command Council's Volunteers of the Year. During the February flood, Searchers English and Morris were tasked with reconning and extracting victims on the Umatilla River near Thorn Hollow.  After helping several individuals and also assisting with the successful air extraction of four individuals trapped in their house, the pair found themselves trapped by rapidly rising waters.  The flood video includes footage of them in their response vehicle being towed to safety by a county road grader.

The pair spent the night at a residence on high ground.  The next morning they were extracted by Chinook helicopter and continued assisting trapped residents.  Morris continued to work on recon and working at roadblocks.  English went on to serve as Operations Chief for the entire rescue effort.  Emergency Manager Tom Roberts wrote in their nominating letter "We are very fortunate to have them on our team, and enthusiastically support their nomination for this award." 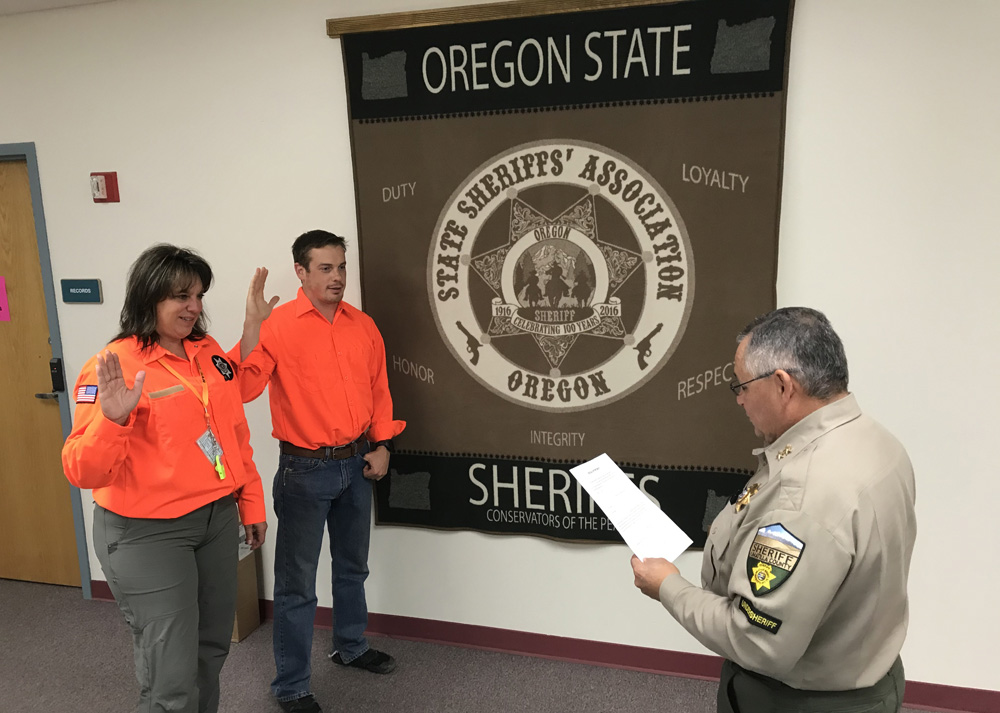 On 11/05/2020 Undersheriff Jim Littlefield swore in Shari Mueller and Paul Smith as the newest members of the Umatilla County Sheriff's Office Search and Rescue Unit. Shari is a lifelong Umatilla County resident, residing in Stanfield where she works with her husband in the agricultural profession. Paul recently transferred to Pendleton and is employed by the U.S. Department of Agriculture, Soil Conservation Service. Both Shari and Paul have hit the ground running and have participated in recent field training exercises. We are excited to have them as part of the unit. 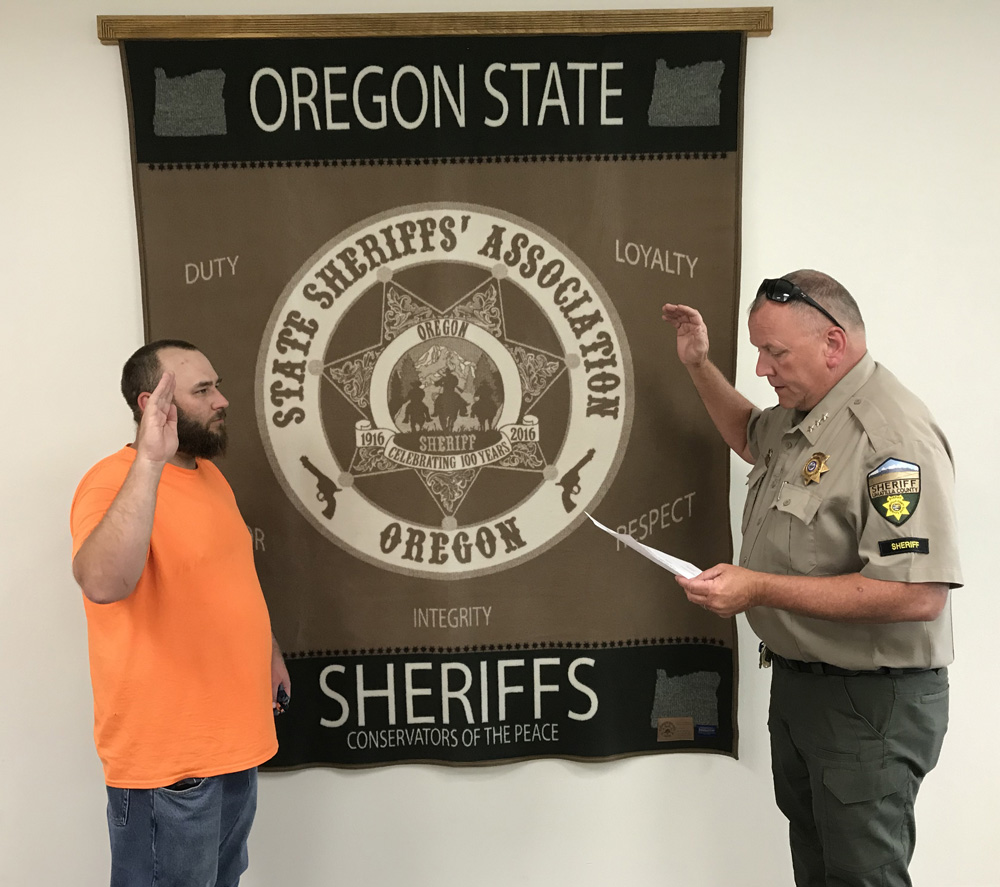 On 07/17/2020 Sheriff Rowan swore in Grant Matlock as the newest member of the Umatilla County Sheriff's Office Search and Rescue Unit. Grant resides in Pendleton with his family. Grant works for the state Department of Transportation overseeing contract preparation and specifications. Grant enjoys the outdoors and is especially interested in the unit's drone program. We welcome him to the UMASAR team!

The Board of Directors of the Umatilla Electric Cooperative headquartered in Hermiston recently approved a $5000 donation to the UMASAR Foundation for use in purchasing a new drone. 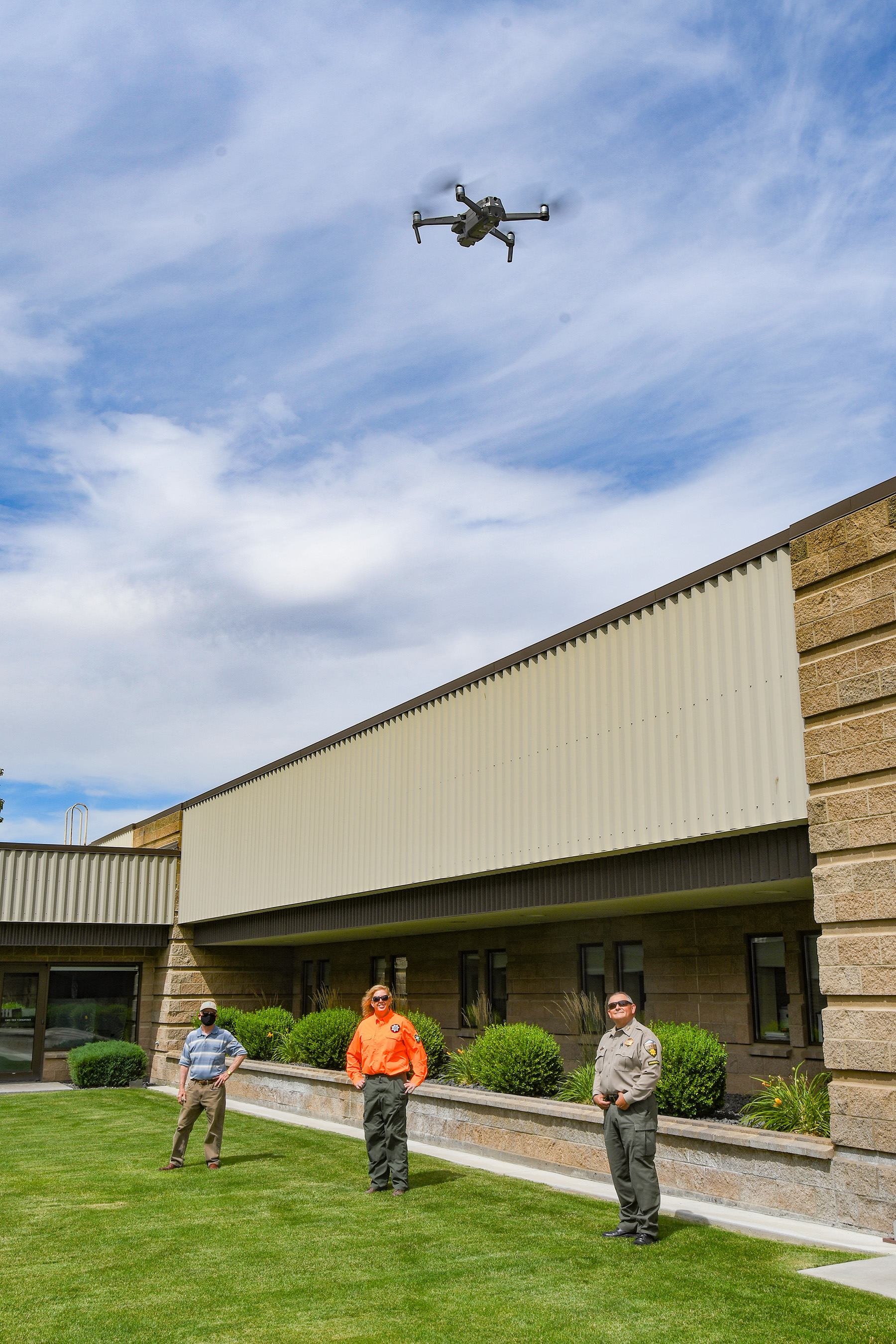 As a result, the foundation purchased a DJI Mavic 2 Enterprise Dual specially configured by the vendor for public safety deployments. The dual in the name refers to the dual camera system on the aircraft. It contains a 4k video capable visible camera along with a lower resolution infrared camera. The control pilot is able to switch between the two video feeds or view a mix of the two. The IR camera should be useful in locating the warm bodies of lost or injured persons, especially when ambient temperatures are low.

The new aircraft has a longer flight time than the current UMASAR drones and also can fly in lower temperatures. In addition, the aircraft can be outfitted with a bright spotlight or a speaker. Using the speaker the control pilot can either make real time announcements or play pre-recorded messages. 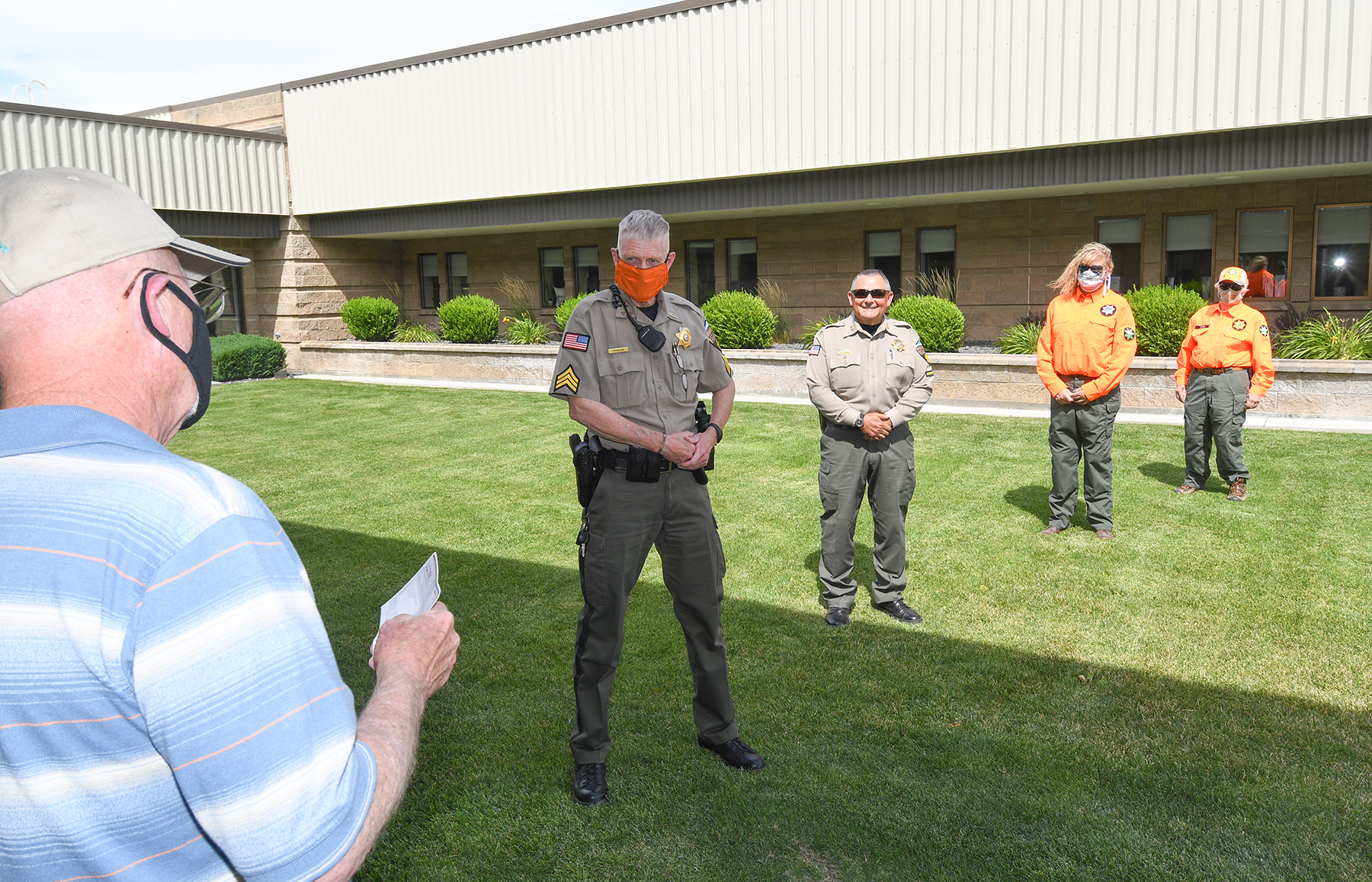 The drone has a special integrated controller that can be rapidly deployed in emergencies. The UMASAR drone team is excited to add this new aircraft to its drone fleet. The aircraft has already been used in an actual mission. A UMASAR drone team responded to Richland, OR in Baker County in the search for a missing juvenile. (Unfortunately the body of the juvenile was subsequently located in Brownlee Reservoir.)

On July 9 Umatilla Electric COOP Board Director Johnny Otis presented Undersheriff Jim Littlefield, Sgt. Dwight Johnson, and UMASAR volunteers Dani Smith and Jan Good with a check to pay for the new drone. The UMASAR Unit and the Sheriff's Office wish to thank the Umatilla Electric COOP and their customers for this generous donation. The new drone will help us be more effective in keeping our county citizens and visitors safe. 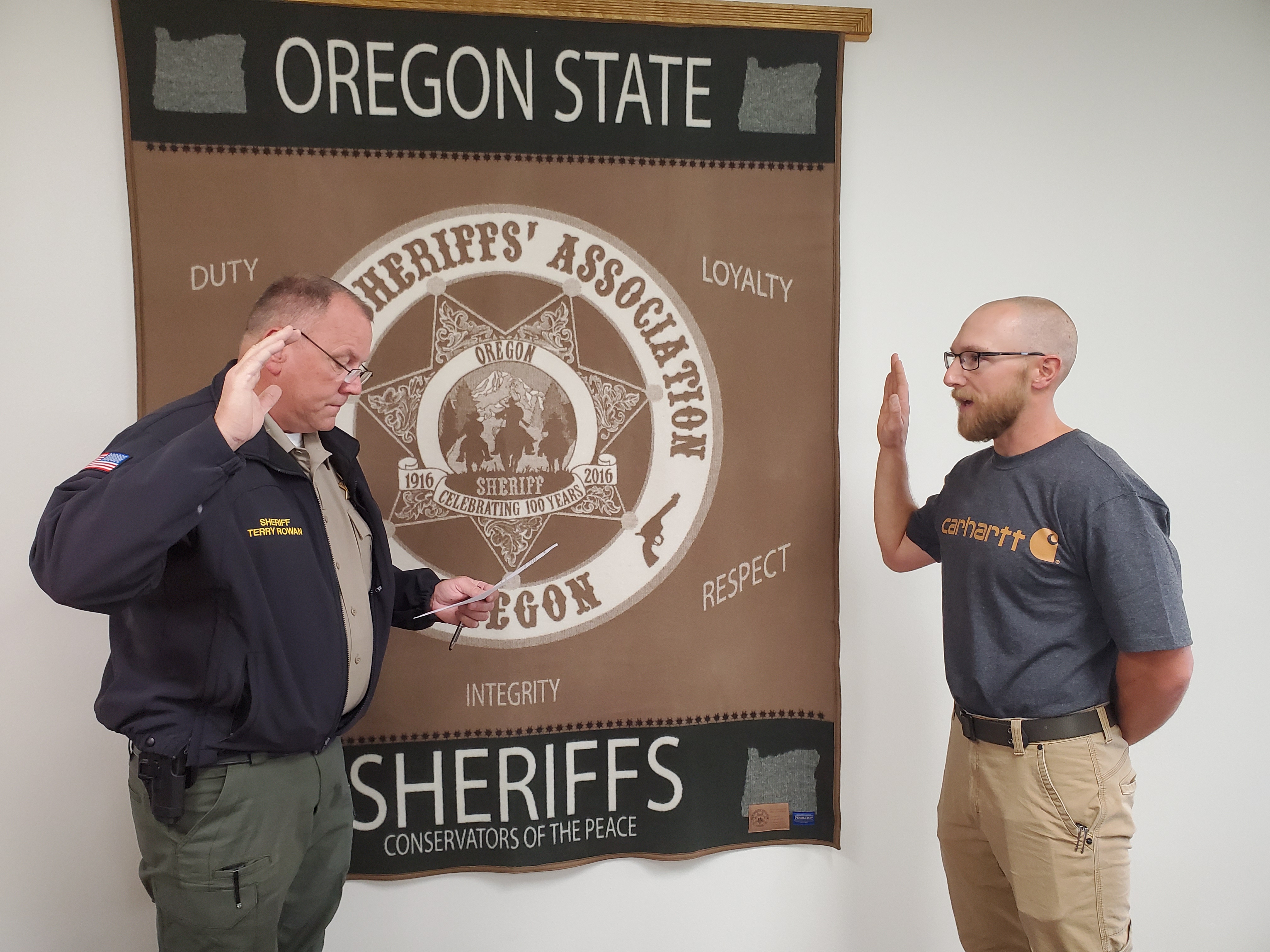 On Thursday, 05/21/2020 Daniel Gardner was sworn in as the newest member of the Umatilla County Sheriff's Office Search and Rescue Unit. Daniel resides in the Hermiston area with his young family. He recently transferred to Umatilla County from Klamath Falls and works for the Army Corp of Engineers. He is also a member of our local Army Air National Guard unit. Daniel brings a solid outdoor skillset with him. We welcome him to the UMASAR team!